It’s official, I’m breaking up with coconut flour or at least when it comes to muffins.  I made a batch of apple cinnamon walnut muffins a few months ago, and they looked delicious with perfectly shaped, crumb topped tops when they came out of the oven. Unfortunately, you can’t judge a muffin by its top-they did not taste delicious at all! They were a soggy, inedible mess with the consistency of a wet dish sponge.  Blech!

I have used coconut flour before without a problem, like my Crazy for Coconut Quinoa Chocolate Chip Muffins (see my Instagram for that recipe).  In an effort to give it another try, I attempted a different recipe last week.  They too were a let down. 😦  The only edible part was the very top, as in a 1/4 of an inch of the muffin.  I felt like I was in a Seinfeld episode, and the stumps were not salvageable or edible at all.

Coconut flour typically needs a lot of moisture since it absorbs so much due to its fiber content, but both of the recipes I tried must have had too much moisture.  Either way, I’m not wasting another batch of muffins.  Sorry coconut flour! 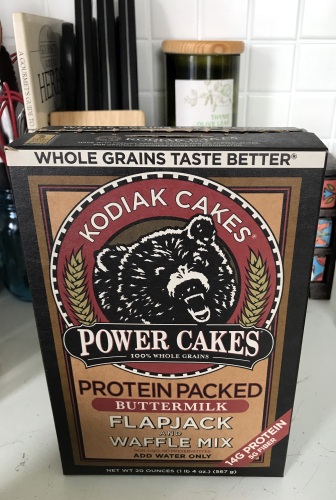 I’m so glad I did.  The muffins I made with  the mix were love at first bite!  The Power Cakes mix is 100% whole grain with added protein, which is a bonus since I tend to struggle with breakfast ideas that keep me from getting hangry by 11 am.  As I’ve mentioned in previous posts, I don’t like eggs on their own or in primarily egg based recipes like quiche so I’m limited when it comes to breakfast.  I followed the recipe on the box with some substitutions and add-ins.  Two muffins clock in around 14 grams of protein and were great for breakfast along with a few slices of turkey bacon and some fresh strawberries.  And they were delicious from tops to stumps. 🙂 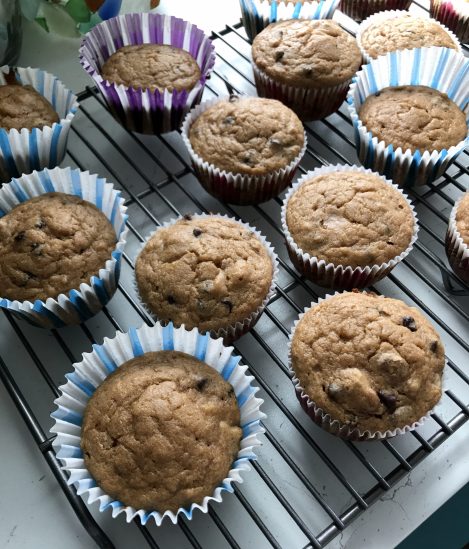 Preheat oven to 350º F.  In a large bowl, mash together the bananas, coconut sugar and coconut oil.   Add the remaining ingredients through the cinnamon and mix until smooth.  Fold in the walnuts and chocolate chips.  Fill lined muffin cups 3/4 full.  Bake at 350º F for 14-18 minutes until golden brown and inserted toothpick comes out slightly moist.