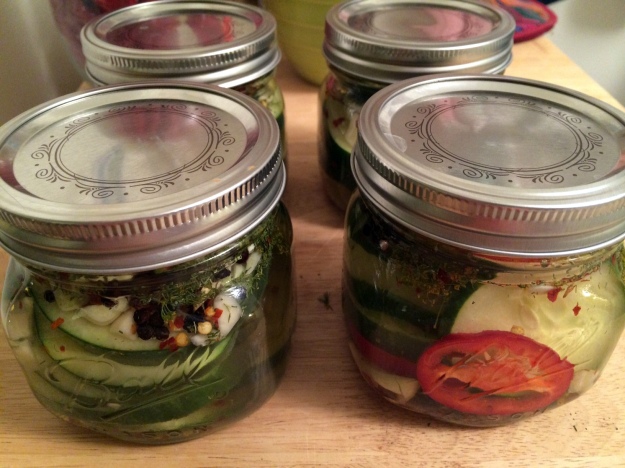 Who doesn’t love pickles???!!!  Seriously, is there anything better?  Growing up, there was a WaWa just around the corner from my parents’ house, and I would love when my dad would get pickles from the big barrel for us.  (It’s amazing how the simple things in life made you happy as kid.)  If you read my last post, then you know that I was lucky enough to receive an abundance of tomatoes and cucumbers from a friend’s neighbor.  I got a second batch, and instead of making another cucumber salad, I thought I’d give homemade pickles a try.  I ended up combining two separate recipes and sort of just made up the rest as I went along.  I have to wait 48 hours before I can taste the final product so hopefully they’re good! 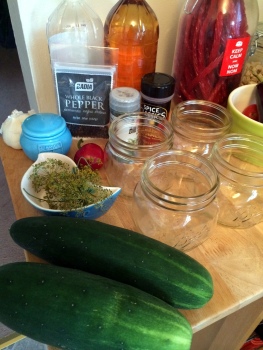 In a large saucepot, combine vinegars, water, sugar and salt. Bring to a simmer. 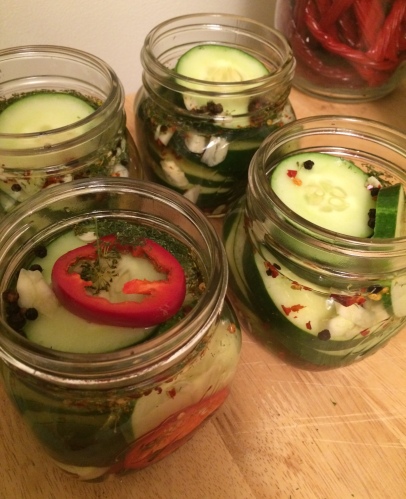 Wash and slice the cucumbers to desired thickness.  Arrange four 1 pint canning jars on counter and pack the cucumber slices into the jars. Add the spices next.  (I also sliced up a cherry bomb pepper and added it to one of the jars to give those pickles an extra kick.)

Pour the brine into each jar, leaving approximately ½ inch headspace.   Tap jars gently on countertop to dislodge any trapped air bubbles.  Apply the lids and let jars cool to room temperature.  Place jars in refrigerator and let them sit for at least 48 hours before eating.  They will last for about a month (if you don’t eat them before that!)